4 Ways to Stop Sabotaging Yourself 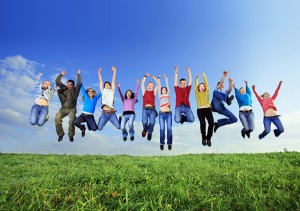 Last month, a video of Jim Carrey giving an inspiring commencement address went viral, gaining more than 7 million views on YouTube. The comedian poignantly captured what holds most of us back from achieving our goals, stating:

You can spend your whole life imagining ghosts, worrying about the pathway to the future, but all there will ever be is what’s happening here and the decisions we make in this moment, which are based on either love or fear. So many of us choose our path out of fear disguised as practicality. What we really want seems impossibly out of reach and ridiculous to expect, so we never dare to ask the universe for it.

He went on to tell the story of his father, who “could have been a great comedian,” but instead lost his “safe” job as an accountant. “I learned many great lessons from my father, not the least of which was that you can fail at what you don’t want, so you might as well take a chance on doing what you love.”

Carrey’s simple and inspiring message has been splattered across social media, showing how much it hits home with so many. Every one of us is capable of undermining our own goals. We all have an inherent inclination to self-sabotage. Two of the most important questions we can ask ourselves is why and how do we get in our own way of achieving what uniquely matters to us in life. Here, I list four of the most common elements that cause people to place unnecessary limitations on themselves that keep them from living their dreams.

1. Self-hatred: Although, every person will land somewhere different on the spectrum of self-perception, from self-loathing to self-confidence to narcissism, every one of us is divided. Part of us is on our own side, goal directed and positive. However, part of us, a part my father psychologist Robert Firestone refers to as the “anti-self,” is against us. The anti-self is like an internal enemy that resides in our minds. It speaks to us through a series of self-critical, self-denying or even self-soothing thoughts known as the “critical inner voice.” The purpose of this inner voice is to hold us back from what we want and to keep us in our place, so to speak.

The critical inner voice is shaped from early life experiences, ways we were viewed and treated growing up. If we were regarded as a burden or told we were stupid, we will engrain these beliefs in our psyche, accepting them on some level as truth. We are also affected by our early environment. If we were miserable and lonely, we may grow to feel unworthy or uncomfortable socially. If we were told, tasks would be too hard or shown, by example, to be passive or victimized, our critical inner voice will echo these messages in our minds for years to come. We may also imitate or take on the attitudes that our early caretakers had toward themselves. If they were self-hating, timid or depressed, for example, we may emulate these traits or view ourselves as having these same characteristics in adulthood.

2. Comfort: The critical inner voice likes to keep us in a box, pigeon-holed by an identity that was assigned to us and not necessarily one we earned. For this reason, it can be tricky and can flood us with thoughts that are seemingly self-soothing. It’s easier to recognize an internal enemy when it’s yelling at you that you’re stupid, ugly or a failure. It’s harder to identify when it’s whispering thoughts like, “You’re fine on your own. Just be by yourself. Have that extra slice of pie. Smoke one more cigarette. You deserve it. You’re tired. Life is too hard. Turn on the TV. Kick back. Don’t worry about your goals today.”

This soft, parental voice further warns us of potential dangers. “Don’t make a fool of yourself. Stay in the background. You’re not getting that promotion. You’ll only be disappointed and humiliated. Do you even want it anyway?” Listening to this voice may feel comfortable at first, but once we give in to bad habits or avoid going after what we want, our inner critic starts in with the self-punishing thoughts, “What a fat loser. No one loves you. You’ll never amount to anything. You’re a nobody.”

3. Rigidity: Even though a negative self-image is unpleasant and destructive, we often don’t challenge it, because it’s familiar. We start to make rules for ourselves and our lives based on old defenses that we believe will protect us but that actually hurt us in the long run. These defenses are often adaptations we made to less-than-ideal conditions in our childhood that now serve to limit us in adulthood. Being quiet in our household may have kept us from getting yelled at as kids, but acting timid as adults can keep us from being our real selves and getting to know people on a deeper level. Similarly, losing our temper may have been the only way to feel heard by our parents, but yelling at our partner or spouse will only push them further away.

The defenses we form as a way to self-protect often serve as a foundation for a series of rules we make that can limit our lives. We see everything in terms of shoulds or shouldn’ts, cans or can’ts. “You should only date men or women who will take care of you. Don’t let people get that close to you. You can’t handle too much responsibility. You shouldn’t ask for help. You can only have a job that doesn’t involve creativity.”

4. Fear: As Jim Carrey pointed out to a room full of fresh-faced grads, fear is usually at the root of what holds us back: fear of the unknown or unfamiliar, fear of failure or that our critical inner voice will be proven right, fear that that voice will get louder or stronger and overpower us, fear that we will have too much to lose or that we will have to face pain or rejection. The truth is, we are much more resilient than we think. What feeds our fear is that same inner voice that tells us we can’t handle obstacles.

In reality, life is both joyful and painful. The more fully we live and love, the more sadness we are bound to experience. Our inner critic tries to shield us from feeling the joys and pains of existence. It keeps us in a chronic state of numbness or dissatisfaction. In order to face our fears, we must consciously identify and actively ignore this coaching.

There are many ways to counter this inner critic, a subject I will expand on greatly in my upcoming free and CE Webinars on stopping self-sabotage as well as the online course, “Overcome Your Inner Critic.” All of us can develop a more realistic and compassionate view toward ourselves. We can learn to foster self-compassion, which studies show can improve every aspect of our lives. Research from Dr. Kristin Neff showed that, in comparison to self-esteem, self-compassion is associated with greater emotional resilience, more accurate self-concepts, more caring behavior in relationships, as well as less narcissism and reactive anger. In this more centered state, we are better able to go after our goals and cope with any anxiety that may arise. We can start to distinguish what we really want versus what others want for us. We can make our destiny rather than live a destiny prescribed to us by our history.

Just what I needed to hear. I thought maybe I was schizophrenic or MPD or something because that anti-self as you call it has beaten me down my entire life. I have long complied with that voice and it gets me into trouble (four felonies), and continues to lead me into self-sabotaging behavior, sabotaging relationships and occupational advancement, pushing me into total isolation.

I have wondered if it wasn’t me, as in perhaps a demon, or that it is a self that is a self just as much as I think I am a self, which comes out without me realizing it. Because I day dream so much every day (wish I didn’t), and because effect of day dreaming for me is like being completely absent, I miss entire conversations and am accused of not listening.

Accepting Our Anger During the Pandemic
January 28, 2021
This January marks the 10th month that my husband and I have been quarantined in our home. Above all else,…

Saving Lives from Suicide During a Pandemic
June 30, 2020
There are ways to intervene and help one another through the darkest of times. The current crisis we’re enduring with…

The Trauma of Racism
June 5, 2020
In the United States, black people are almost guaranteed to be born into a life of trauma. It is a…