Money Stress: Why We Use Money to Feel Bad About Ourselves 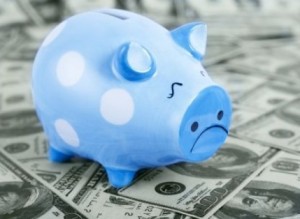 Work and money are the leading causes of stress in America, according to the American Psychological Association’s “Stress in America” survey. Money may seem like a practical concern, requiring rationality and logic to manage. However, we very often underestimate the emotional aspects of handling money.

Our attitudes about money have deep roots in our past. By the time we become financially independent ourselves, most of us have already had a significant number of tension-causing encounters with money. Whether it was watching our parents argue over spending, seeing a loved one lose a job, or worrying over where our next meal would come from, stressful experiences surrounding money are entrenched in our memories. It’s no surprise then, that as adults, these memories shape our attitudes toward ourselves and others in relation to finances. Regardless of economic status, almost every person I’ve met has, at one point or another, used money to feel bad about themselves and to worry and distract them from more meaningful facets of their lives.

Because money is tied to deep (even subconscious) feelings from our past, people are often irrational when it comes to money, both in the long and short term. The “critical inner voice” is a negative thought process we adopt from early life experiences. It represents destructive and critical attitudes we’re exposed to that we’ve then take on as our own point of view. For example, a child who grows up with a stingy parent, who induces guilt over anything the child asks for, may grow up feeling stingy toward him or herself. Children who are spoiled, rewarded with gifts as a means to soothe them or keep them from throwing a fit, may grow up never feeling satisfied, always wanting more, yet feeling unworthy of what they receive.

Just as it wreaks havoc with many areas of your life, your critical inner voice can heavily complicate your relationship with money. The “voice” may tell you that you’re worthless if you can’t reach a certain income level. It may induce extreme guilt, anxiety or rigidity when it comes to spending. It may entice you to splurge, “Go ahead, buy that pair of shoes. It will make you feel better, and it’s just what you need after the day you’ve had.” It will then beat you up for your actions, “What is wrong with you? You’re so irresponsible. There you go wasting all your money. Now, you’re really gonna be in trouble.” This particular type of thinking can have serious consequences, fueling destructive or addictive behavior, such as compulsive shopping or erratic spending.

The critical inner voice often creates conflict between couples when it comes to money. For instance, it may tell you that it means something significant if you spend money on one another, feeding you thoughts like “You should buy her something nice. It’s the only way to really earn her love,” or “He didn’t get you anything for our anniversary. He must not really love you.” The critical inner voice will also create paranoia between a couple: “She thinks I spend too much. I better not let her know what I bought this weekend” or “Does he think I’m made of money? He can’t just expect me to support the two of us!”

The critical inner voice can cloud your judgment when it comes to money, because you are no longer making choices based on real, practical information. Instead, you are acting on emotionally-charged advice from an inner critic. This voice affects people at all stages of wealth and at all spending levels. It’s therefore very valuable to ask yourself: Whose voice are you hearing when it comes to your finances? What childhood dynamics play into your point of view toward money?

A woman I recently spoke to described how her mother used to indulge her with gifts. Almost every day, upon returning from school, her mother would greet her with new, expensive toys and designer clothes to wear to school. When the young girl showed a slight interest in learning to play piano, her mother left a brand-new keyboard in her room before she’d even attempted a single note. The intrusive way her mother insisted on these gifts, coupled with the family’s low income, led the young girl to feel extreme guilt and resentment. She remembered her father worrying about money and pleading with her mother to stop spending lavishly. Yet, her mother continued buying high-end items, purchasing only the “best” brand of everything from soap to stilettos. All the while, she showered her kids with unwanted treats, and secretively tried to hide her spending from her husband.

The woman grew up feeling considerable conflict about money. On the one hand, she was guilty and embarrassed to receive gifts throughout her life, yet she was also compelled by the mentality that everything should be the best. She drew comfort from buying extravagant items for herself, an indulgence very much based on her mother’s spoiling behavior. She then felt creepy and bad about herself, just as she had as a child. Her parents arguing about money had created this division within her, yet she still carried these attitudes with her as an independent and self-sufficient adult.

As you start to identify where your point of view about money came from, you can begin to make a separation from attitudes and behaviors you don’t like in yourself. You can differentiate from destructive or unhealthy influences that lead to financial conflicts in your current life. Separating from these deeply-engrained, old attitudes, whether they’re telling you to be overly cautious or to spend freely, might stir you up or even cause you great anxiety. Here are some helpful tips when attempting to actively free yourself from these limiting attitudes:

Remember that real change is possible at almost any point in life. You may not be able to control the economy or every aspect of your own finances, but you can take control of your attitude and find a great deal of power within your own mentality, integrity, and emotional intelligence. Challenging your inner critic will help you to reshape your behavior, and it will add richness and rewards to your experiences that are far more than monetary.

Thanks for this article! It came at a very opportune time. I am a therapist with a one-year old practice in a rural/urban area. Finances (or what I perceive as lack of!) have been raising my anxiety levels. It’s that roof that needs shingles, the new vehicle that will get through the snow, the new office space, etc. Having read the article, I feel much better! Thanks

All Hands on Deck: How We Can Help Someone Who’s Suicidal
September 11, 2012
The whole world has felt the impact of recent reports about suicide. The suicide rate in the U.S. military reached…