VIDEO: Dr. James Garbarino talks about the Parental Influence on a Child’s Sense of Self

Dr. James Garbarino talks about encouraging children to enjoy life through their own accomplishments.

Dr. James Garbarino: I think it’s important that parents have a sense that who they are will have some impact on who the children think the children are and what the children want to be.  I don’t think it has to be at the level of concrete demonstration.  You don’t have to be a musician to encourage your child to learn to play music.  What you have to be is somebody who says, “There’s enjoyment to be found in life.  There’s enjoyment that comes from disciplined work at something.  A sense of accomplishment.”  And maybe you can be a model for that in your own area.

But I think the most successful parents don’t try to make their children into images of themselves.  But what they do is they say, “OK, what’s the best you can be in your own terms?”  In the case of my son, for example, I was a ball player as a kid, you know, baseball basketball, football.  When my son was little, I realized very clearly he was not going to be a ball player.  Just the whole eye/hand thing was not going to be there.  So it was a big challenge to be able to disconnect from my sense of what I was to say he should be that.  And rather to find a way to encourage him to be what he could be.

Actually, he made much wiser choices.  I mean, my knees burned out from all the basketball.  He’s a kayaker and a rock climber, much healthier sports into adulthood than the typical children have.  So that was a big challenge, not to see that he had to be me.  My daughter, on the other hand, is much more like me and in some ways, it was a lot easier to be her parent because I really could just sort of generalize from me to her.  Whatever I thought my response would be, her response would be, so I’d know.

With my son, it required much more sort of hypothetical thinking because he was temperamentally so different from me.  It required me to say, “Alright, I would have reacted this way, but he’s not me.” With my daughter, it was much simpler in that sense.  And still is today.  I know how she’s likely to respond because it’s very much like my response.

So, you know, it requires flexibility to see the child for who the child is and to be a model of as much positive things as you can without the expectation to extrapolate it directly over to the child.  Cause you’re certainly asking for trouble if you do that — trouble for somebody – your disappointment, their disappointment, somebody’s going to be disappointed in that process.

3 Essential Steps to Take Before Getting Angry at Your Kids
Tags: communication with children, encouragement, parenting, parenting advice 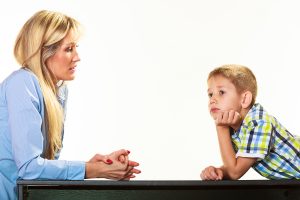 What’s Up with Boredom?
January 28, 2016
In my office I have encountered clients who report “boredom” as an almost unbearable state.  My young clients find they…