Dr. Allan Schore describes working in the heart of the inter-generational transmission of trauma and suicide.

Dr. Allan Schore: There is now pretty good evidence that the attachment mechanism cuts across all species, all mammals.  So we’re looking at the same mechanism here.  But, essentially what we are now thinking of is that a female learns how to be a mother to her infant through her own early experiences of being an infant to her own mother.

Because when she was an infant, here she was, with these right brain to right brain communications, learning the language, learning the nuances of it, etc.  And at later points in time, that same internal working model now will replay in pregnancy.  Which also incidentally means – and let me say this again in another way – in the first year of life if the baby is exquisitely sensitive to these negative events, it is also more so than at any other time in the life span, plastic.

That means that there are more possibilities here for growth because the biological growth is going on, per se, genetically encoded, etc.  And so there is an enormous amount of plasticity.  That means that working with a depressed mother is – while she is having an infant, pregnant or with the infant, you’re actually talking about two lives.  There would be a possibility there of working right in the heart of the inter-generational transmission of trauma and of suicide, etc.

And that’s where it should be moving.   Obviously, women with high levels of post-natal depression, am I right?  16% I think, 16%.  That would be a target population that we would want to move into, especially in suicidology.   And could really make a large impact.

And, as you know, in borderline, you also get swings from extremely high intensive high arousal states, rage states down into abandonment, depression down into these low states, etc.  So that population also I would think would be a critical population for early intervention towards suicide.  Now, just for the record, as you’re well aware of, there are high rates of suicide also in borderline personality disorders.

To Listen to a Child
November 11, 2009
T. Berry Brazelton M.D. Understanding the Normal Problems of Growing Up – This is one of child development expert and… 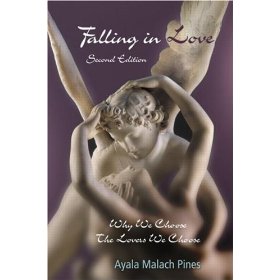 Falling in Love: Why We Choose the Lovers We Choose
November 17, 2009
Ayala Malach Pines, Ph.D. The psychological roots of why we choose the partners we do can give us fascinating insight…

How to Succeed in Life Without Really Trying
July 5, 2011
All right, so that title is probably a tad misleading. But how many of you thought, “Really? Great! Sign me…