VIDEO: Dr. James Garbarino describes some differences in parenting in the 1950s versus today, specifically the challenges in modern media and exposure.

Dr. James Garbarino: I think there’s a range of things that you might call “social toxins” that make raising children more difficult than it used to be.  For example, the 1950’s, when I was a child, were a time of obliviousness.  Then, parents didn’t have to answer a question from their child like, “Mom, what’s this about the ‘oral office’ that the President is engaging in?  What are these stained dresses about?”  You know, President Eisenhower was the president.  As a child, we didn’t know about his sexual life.  It was not part of the public forum and so parents didn’t have to deal with that, whereas now you do.

This ability of parents to control access to information changed so fundamentally with the introduction of television first and, of course, now, with the internet and the nature of television — it’s startlingly different.  In the ‘50’s, turn on the television, what’s the worst that a child could see?  Today of course, there’s nothing a child can’t see.

One obvious difference is in the field of child sexual abuse.  People used to be able to say that if a young child had a precocious knowledge of sex that that was a warning sign they’d been sexually abused.  Doesn’t work anymore because now they could just be watching cable TV. So I think that the challenge, the complexity of the task, the need to deal with difficult information has gotten much, much greater.  I think that’s certainly one.

I think secondly, the increase in economic inequality in the society poses a big challenge to parents.  It’s empirically very clear that inequality has increased.  The United States has more inequality than most Western democratic, modernized societies.  And that constantly leads to this comparison, “Why don’t we have or why can’t we get …”  There was a time when there was less inequality and it was more invisible.  You didn’t know.

And of course, that’s tied into the general sort of materialistic shift.  The money it takes to be a “normal” kid now, the income you have to generate for your kid to be normal — you have to pay for a cell phone and cable TV and designer jeans and designer shoes and on and on … without even getting into upper middle class affluence.  Just the basics are so demanding that it puts so much pressure.   And then in turn, that pressure leads to anger and exhaustion on the part of parents as well as this sort of grim sense of deprivation on the part of children.  I once interviewed a boy and he said, “When you came up, did you come up poor or regular?”  And, boy, that really captures it, that to feel irregular leads to shame and to rage and to humiliation and all of that is magnified and parents have to deal with that.

The hyper-sexualization of childhood and early adolescence …  again, people have to manage the facts that not only are girls achieving puberty earlier, but the visual borders between childhood and adolescence have eroded to the point where lots of young girls are wearing clothes that are very sexy, very grown up looking. And their parents have to navigate that because once one child has it, then another child wants it and they want the makeup.  And this is assuming the parents have good intentions to start with.

I think that the complexity of the task has just increased so dramatically. But the underlying needs are probably unchanged in many ways—the need for acceptance and an intact structure of authority and character education and all those sorts of things.  But they become harder in this sort of toxic environment.

With high school kids, one example I would point to is that research in the 1950’s and early ‘60’s showed that kids do better in small high schools than big high schools, particularly kids who are somewhat at risk.  And the finding was that when the high school got bigger than about 500 students, grades 9 – 12, it crosses a threshold into bigness and the dropout rate for marginal students increases and the delinquency rate increases and the alienation increases.  Well, in 1955, the average size of America’s high schools was 500.  By 1975, it was 1,500.

So there’s this accumulation of challenges.  My kids are now grown and I’m grateful for that, in a sense.  I didn’t have to have the skill of managing their internet access when my kids were little.  Now that would be an important requisite for the job. 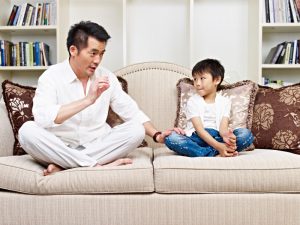 6 Rules to Live By When You Discipline Your Child
November 10, 2014
Anyone can tell you that discipline is a messy business. Not even the best of parents could possibly get it… 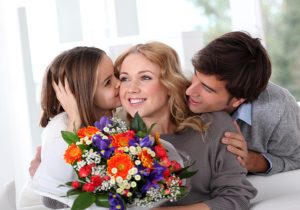