Is Your Technology Use Hurting Your Kids? 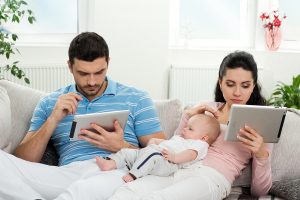 A recent study of families in fast food restaurants showed that 70 percent of parents were distracted by their devices during their meal. In the meantime, their children complained and misbehaved, throwing tantrums and even food at their parents. The usage of smart phones has overwhelmed the population, with people barely able to make it through dinner without texting, tweeting or surfing online. The problem is that checking in on Facebook often means checking out of whatever interaction you might have with the person sitting right across the table. In the face of such monumental distraction, we’re forced to ask how this will affect the next generation.

From the get-go, babies need the attention of their parents, not just to survive but to thrive. Parenting an infant doesn’t just mean meeting his or her needs by providing food, clothing and diaper changes. Results from the still-face experiments led by famous child development researchers in the 1970s highlighted the potentially harmful emotional, social and developmental impact when a mother stops responding to her baby with appropriate facial expressions. Since then, other studies have further shown that affect mirroring, in which the mother interacts with her child with high levels of “attention maintenance, sensitivity and responsiveness” resulted in babies that ranked “high on prosocial behaviors and social expectancy, whereas infants whose mothers ranked low on affect mirroring ranked low on these measures.” Think about the blank stare you give your cell phone. How often might your baby be looking to you for a response when your own face is non-expressive or clearly reacting to something else?

Children seek contingent responses. They start mirroring parents’ facial expressions almost as soon as they’re born. They stare into their caretaker’s eyes, looking for a reaction. This response is what enables their brains to fire and wire. An attuned response from a parent or caretaker allows them to feel both seen and secure, while also helping them to formulate their own social skills. A lack of response (perhaps from parents who are persistently on their devices), could lead to ruptures in their attachment patterns. Attachment styles are built in early childhood attachments and later serve as working models for adult relationships. A person’s model of attachment influences how he or she goes about getting his or her needs met. Children who are ignored or not responded to (as in the still-face experiment) or whose parents are often mis-attuned may form less-than-ideal attachments that will hurt them in their later lives.

Sadly, parents who are distracted by their devices are hardly attuned to their children. They may very well miss the hurtful effect they are having by ignoring their child’s emotions. They may even be hurting the child’s self-esteem. In interviews, children expressed feelings of being boring, because they are unable to compete with smart phones for their parents’ attention. Their feeling toward the phones waiver between hostility (calling them “dumb” phones) and desire (competing with parents for the phone itself). The children observed in the fast-food study became considerably agitated, growing rowdier and misbehaving to turn their parent’s attention. And what do parents often do in response to their child’s frustration? Unfortunately, they tend to hand their child the device, teaching them, in turn, to de-tune and disconnect, just as they have been doing.

According to the American Academy of Pediatrics, “Today’s children are spending an average of seven hours a day on entertainment media, including televisions, computers, phones and other electronic devices… Studies have shown that excessive media use can lead to attention problems, school difficulties, sleep and eating disorders, and obesity.” While some technologies may assist with learning problems, others may hurt our children’s abilities. Television, for example, has been linked to attention problems in children. Studies show that kids who were exposed to television between ages 1-3 were more likely to develop ADHD by age 7.

Apart from these developmental risks, there are the social and psychological impacts to consider. Plugging a child in to technology may teach them that they can’t tolerate even a few minutes without entertainment. It may create a dependency that shifts them further from relying on face-to-face human interaction and even their own imaginations. Furthermore, it may move children away from adopting the mindfulness skills that would lead them to a happier and healthier life.

Mindfulness describes mental state awareness — a person’s attunement or sensitivity to the mind of another person. Mindfulness helps people to live more in the moment at a slower pace, with less stress and improved overall health. If technology is taking us away from connection, then we may be raising a far less mindful generation, a more self-centered, narcissistic, easily bored generation.

Social intelligence skills have further been reported to be the best predictor of success in life, even better than IQ. These skills include knowing one’s emotions (self-awareness), managing emotions, motivating oneself, recognizing emotions in others and handling relationships. Could too much screen-time be robbing our kids of the interaction required to build their social intelligence?

As parents, asking ourselves these questions is fundamental to raising our children in a digital age. However, the answer is neither to panic nor to throw our hands in the air, assuming that there’s nothing we can do about it. What we can and should do is become more mindful in ourselves, to make it a point to be more attuned to our children. This doesn’t mean catering to their every whim or “over-parenting,” as our society has tended to shift toward. It’s about making the time we have with our kids matter, putting down the phone and really looking at our kids, listening to what they have to say and responding in a way that helps them to feel seen and heard. And when it comes to technology, we must lead by example, showing them rather than telling them healthier ways to integrate these inevitable “devices” into our lives.

How to Help Your Child Get Things Done (Without a Fight)

Anticipating the birth of my grandchild, I went looking for some professional advisement on the effects of parents’ cell phone use on their children, to pass on to my daughter and son-in-law. Dr. Firestone’s column nearly matches my intuition about this trend! Earlier today, I was describing to my daughter the profound beneficial effect of a parent’s direct eye contact with their child, as well as emphasizing the importance of loving touch, vocalizations, and song. Thank you, Dr. Firestone, for this excellent essay, which I have posted to Facebook for the many young parents and about-to-be parents on my Friends’ list! 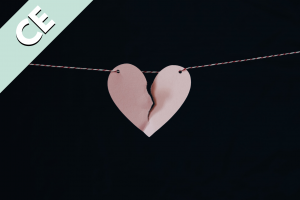 How To Use Tough Times to Truly Connect to Yourself
Tough times are tough. 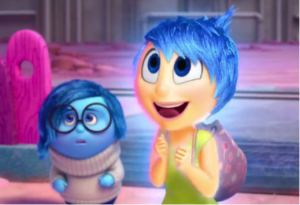 What Inside Out Can Teach us about Loving our Kids
August 19, 2015
The other day I recommended the movie Inside Out to my friend, Cynthia, as an intervention. Her favorite niece, Emily,… 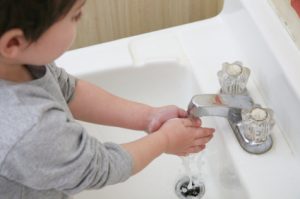 Understanding the Underlying Triggers of OCD in Children by Jenny C. Yip, Psy.D.
February 16, 2012
The diagnosis of Obsessive-Compulsive Disorder (OCD) is usually quite straightforward in adults. However, symptoms of OCD in children often manifest… 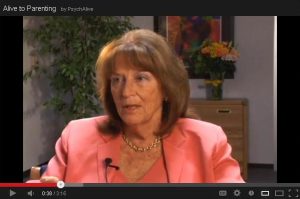 Being a Role Model to Your Children
May 23, 2013
Child development expert Joyce Catlett discusses how leading our own lives to the fullest positively influences our children.