Society, Relationships, and Pleasure: An Interview with Dr. Carol Gilligan 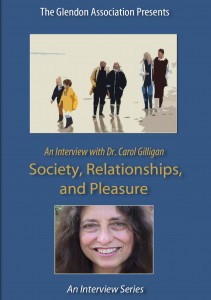 Dr. Carol Gilligan is an American feminist, ethicist, and psychologist best known for her work on ethical relationships and gender studies. She is currently a Professor at New York University and a visiting Professor at the University of Cambridge, where she works with the Centre for Gender Studies.   Dr. Gilligan taught at Harvard University for more than 30 years. Her ground-breaking book, In a Different Voice  (1982) achieved much critical acclaim and has been described by Harvard University Press as “the little book that started a revolution.” She has published several other books including The Birth of Pleasure (2002), The Deepening Darkness (2009), Joining the Resistance (2011) and the novel Kyra (2008).

In this DVD, Dr. Carol Gilligan addresses a variety of topics including feminism, patriarchy, relationships, pleasure, parenting, and psychotherapy. She dispels myths regarding feminism that have  pervaded both professional discourse and popular media for the past three decades, describing how “patriarchy  creates a rift in the psyche, dividing everyone apart from  themselves.” She discusses relationships and parenting, including the dynamics of mother-son and mother-daughter relationships. Finally, Dr. Gilligan addresses the dilemma of pleasure, stating that “pleasure is act one in a play that ends badly.” Emphasizing its importance, she describes how people often defend against pain by not feeling pleasure.