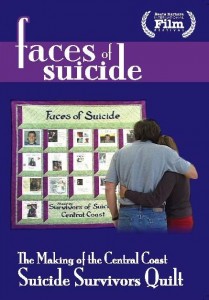 Faces of Suicide is an award-winning documentary short, which follows the journey of several suicide survivors (family members who have lost loved ones to suicide) as they go though the process of creating the Central Coast of California Suicide Survivors Quilt. The Quilt, similar to the original AIDS Quilt, was created to honor the lives of loved ones lost to suicide. The film records the stories and emotions of these brave men and women as they openly share their experiences and reveal how making the Quilt has helped them in their healing process. The words and actions of these individuals poignantly demonstrate the devastating emotional effects of suicide on the survivors, while at the same time underscoring the importance of reducing the stigma of suicide. In making this documentary, the film’s creators and producers hope to raise awareness about suicide as the widespread community health issue it is and to give a name, a voice, and a “face” to both those lost to suicide and to the survivors left behind. Faces of Suicide makes a powerful statement about the need to bring this issue into the open. Official Choice of the Santa Barbara International Film Festival and American Association of Suicidology Conference. Winner at Western Psychological Association Film Festival. This moving documentary is being offered as a community service by the producers.