Dr. James Garbarino: Well, I think at one level, there are some preventive things.  There’s some research on adolescents – parents’ awareness of adolescents’ actual experiences.  And the finding naturally was that adolescents who disclose to parents are the parents who know.  But the developmental finding was that you can increase the likelihood you’ll have a self-disclosing adolescent by establishing in childhood the message, “There’s nothing you could do, there’s nothing you could feel, there’s nothing that could happen to you, that if you told me about it, I would stop loving you.”

And that becomes the prevention so that you have a kid who’s confident about disclosing.  Then, at least, you have access to their world; you don’t get these secret lives developing.  So I think that’s one piece of advice.

A second one is the need for a sort of conservatism.  You know, there used to be a book they gave to new teachers which was called Don’t Smile Until Christmas. And the message was you can always let up as a teacher with a class of kids.  But it’s hard to sort of go back and re-assert control or authority.  And so the same thing might be said of parents.  That if you’re conservative about it, that you create the expectation that you are in charge.

I think with young children I would urge people to get away from the “OK Syndrome,” turning what should be declarative sentences into questions with the addition of the word “OK.”  As in, “Time for bed now, OK?”  “Eat your beans now, OK?”  It sort of sounds like you have no idea what you’re doing.  And then it shouldn’t come as a surprise when they’re 14 and you say, “Be home at 10:00.”  And they say, “Well, who are you to tell me to be home at 10:00?  You didn’t know if I should eat my beans when I was 5.”

So I think there are some very concrete things like that to keep it declarative:  Go to bed now because you need your rest.  Eat you beans because they’re good for you.  That’s somebody who’s a leader and sort of conveys and merits authority.  So, this is very well intentioned on the part of parents.  Often they feel their parents were too directive and they don’t want to be so directive.  But I think they make a big mistake when they do that.

So I think there are things like that, but I think certainly, cutting through it, for example, the work of Ronald Rhoner, that rejection is a psychological cancer.  And, of course, it’s easy to accept a child who’s easy.  And if we think of children with easy temperaments, you know.  Justin Thomas found that only 10% of easy babies had significant adjustment difficulties in elementary school.  But among temperamentally difficult babies, it was 80%.  So acceptance of an easy child is easy.

The real lesson is that you can communicate acceptance to a difficult child.  And, again, not a blanket permission for their behavior, but finding that very difficult, maybe most difficult of parental messages, “I love and accept you and you have to change this behavior.”  There are some people who think you can’t do it simultaneously.  Some of the more behavioral psychologists, Gerald Patterson, say you have to treat it like a bank account.  You have to put positive regard in the bank to draw out — maybe 8 positives — for every one you draw out.

I don’t know if it’s that mechanistic, but I think the message that you have to find a way that, at the heart of it, the child feels acceptance and then you’re sort of fine tuning from there.  But it’s a big, big, big challenge, and let’s say, “ I’m glad I’m past it, in a way.” 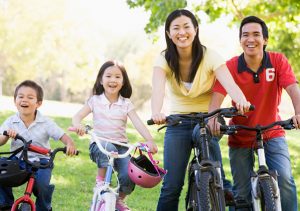 The Perfect Family Vacation – Why We Are Not There Yet
August 9, 2010
Family vacations have long been the subject of sitcoms and PG comedies, each following more or less the same predictable…