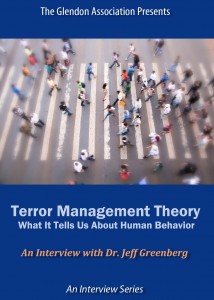 Dr. Jeff Greenberg is a social psychologist and professor at the University of Arizona, where he is the Social Psychology Program Head. Dr. Greenberg is known for coining the concept of Terror Management Theory, along with his colleagues, Sheldon Solomon and Tom Pyszczynski. He developed Terror Management Theory after realizing that two of his primary interests as a social psychologist, self-esteem and prejudice, were greatly impacted by individuals’ knowledge of their own mortality. Dr. Greenberg has published numerous articles on the subject, as well as the Handbook of Experimental Existential Psychology (2004).

In this DVD, Dr. Jeff Greenberg discusses Terror Management Theory from its origins to its applications, including how T.M.T. affects relationships, politics, attachment, violence and self-esteem. He also discusses the role of culture in forming one’s world view and belief system, emphasizing the importance of individuals finding their own personal value in life. He believes “You cannot feel psychologically secure without feeling that you are of value and significance in the world,” and he places great value on developing a real sense of self. Ultimately, Dr. Greenberg advocates that it is better for people to face their mortality rather than hide from it: “It can lead to more appreciation of life, a fuller life and hopefully a life that you’ll have a better impact on people around you.”