Dynamics of Suicide: An Interview with Dr. Israel Orbach 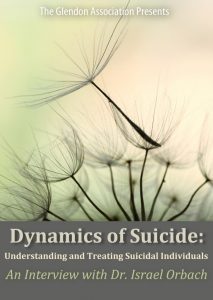 Dr. Israel Orbach (1943-2010) was a clinical psychologist and professor, who specialized in suicidal behavior and suicide prevention. For more than 40 years, Dr. Orbach actively engaged in teaching, research and psychotherapy. He was one of the founders of the Israeli Association for Suicide Prevention, where he served as the first president. Dr. Orbach published several books, includingChildren Who Don’t Want to Live: Understanding and Treating the Suicidal Child, as well as hundreds of chapters and scholarly articles. He won several international awards for his contribution to the understanding of suicide. Dr. Orbach is remembered for both his scholarly contributions to the field of psychology and suicidology, as well as his unique ability to empathize and help individuals in suicidal crisis.

In this DVD, Dr. Israel Orbach discusses the dynamics of suicide and how to both understand and treat suicidal individuals. He begins by addressing suicidality in children and adolescents, explaining how psychological dynamics such as rejection and attachment can impact suicide risk. Dr. Orbach discusses the issue of many individuals having fantasies about death and seeing suicide as an escape— “We try to confront the fantasy about death in order to make it less possible to commit suicide.” He also talks about the role of shame and physical dissociation in suicide. Dr. Orbach draws upon an innate ability to empathize with people in a suicidal state to compassionately describe the hopelessness that suicidal individuals feel, as well as suicidal ambivalence. Finally, Dr. Orbach clearly lays out essential elements of treating suicidal individuals.

How Sick is “Sick Enough?”